from Half Moon Bay

This Golden Snitch Coin Purse is the perfect safe place for all of your loose change. Shaped like the iconic Golden Snitch that Harry caught in his first year at Hogwarts, the golden PU bag features embossed details that really brings the snitch design to life, as well as two zips with white wing-shaped zip tags. On the reverse of the bag you'll find the Harry Potter logo as well as the words, "I open at the close", which famously appeared on the snitch in Harry Potter and the Deathly Hallows. The purse also benefits from a light grey inner lining with a repeating golden snitch print in white. The perfect accessory to take on a shopping trip to Hogsmeade! 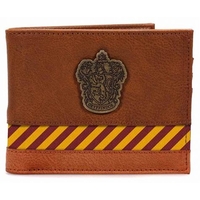