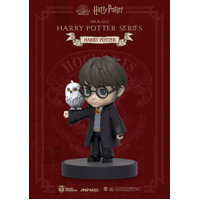 Based on the acclaimed book, Harry Potter and The Philosopher's stone introduced movie goers to a world of magic unlike anything seen before.

As the main setting of the series, The Hogwarts School Of Witchcraft and Wizardry introduced fans to some of the most well-known characters in popular culture.

A full series of 8 designs, using meticulous craftmanship, each figurine looks as though it has popped straight out of the movie and on to your desk.

Crafted in a 3 inch scale and showcasing Harry Potter and his friends, these wonderful figurines are a perfect collection for fans of the magical franchise.