"From the creative team behind the celebrated movie series comes a scrapbook filled with Harry Potter memorabilia, behind-the-scenes filmmaking secrets, and previously unpublished photography and artwork.

Immerse yourself in the world of the spectacular Harry Potter film series, and learn why Yule Ball ice sculptures never melt, where Galleons, Sickles, and Knuts are really "minted," how to get a Hippogriff to work with actors, the inspiration behind Hogwarts castle, and why Dementors move the way they do.

Written and designed in collaboration with the case and crew that brought J. K. Rowling's celebrated novels to the silver screen, Harry Potter: Film Wizardry delivers an enchanting interactive experience, transporting readers to the wizarding world by sharing film-making secrets, unpublished photography and artwork, and exclusive stories from the stars. Full of removable facsimile reproductions of props and paper the Harry Potter films and the talented group of Muggles that has made true movie magic.

Now updated to include all eight of the acclaimed motion pictures, Harry Potter: Film Wizardry Revised and Expanded gives readers a front row seat to the magical journey that brought J.K. Rowling's wizarding world to the big screen. Step off Platform Nine and Three Quarters and into the hidden world behind the scenes of the Harry Potter film series as Brian Sibley, author of The Lord of the Rings: The Making of the Movie Trilogy, The Land of Narnia, and other bestselling behind-the-screen books, makes the magic more real than ever with stunning art, removable extras, a new Harry Potter photo album, and interviews with director David Yates; actors Daniel Radcliffe, Emma Watson, Rupert Grint, Alan Rickman; and other members of the cast, crew, design and production teams.

An Insight Editions book.;Includes 4 leaves of stickers, 1 leaf of punch-out boxes, 1 photo album in a pocket on the inside back cover, and 8 other items attached to pages.

In addition to the stunning art, removable extras, and text from the original book, the new, updated edition of Harry Potter Film Wizardry includes material from Harry Potter and the Deathly Hallows—Part 2 and a removable Harry Potter Photo Album with photographs and captions from all eight movies. Fantastic Beasts and Where To Find Them by J K Row 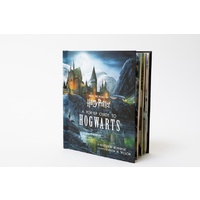 The Archive of Magic The Film Wizardry of Fantasti