The Dark Mark, one of the most well-known symbols in the Wizarding World. The Dark Mark was the symbol of Lord Voldemort and his Death Eaters. Featuring a deadly skull and snake wrapping around it, this mark was used to brand the arm of every Death Eater and to leave behind a symbol of their activities.

Will you practice the Dark Arts and cast spells with He-Who-Must-Not-Be-Named? This officially licensed t-shirt is ideal for casual wearing with a unisex fit.

This shirt is composed of 100% Cotton and has a Unisex fit. This shirt comes in sizes Small, Medium, Large and XL. 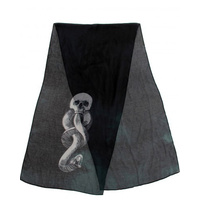 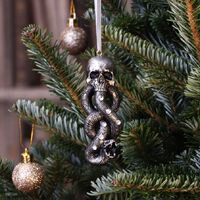